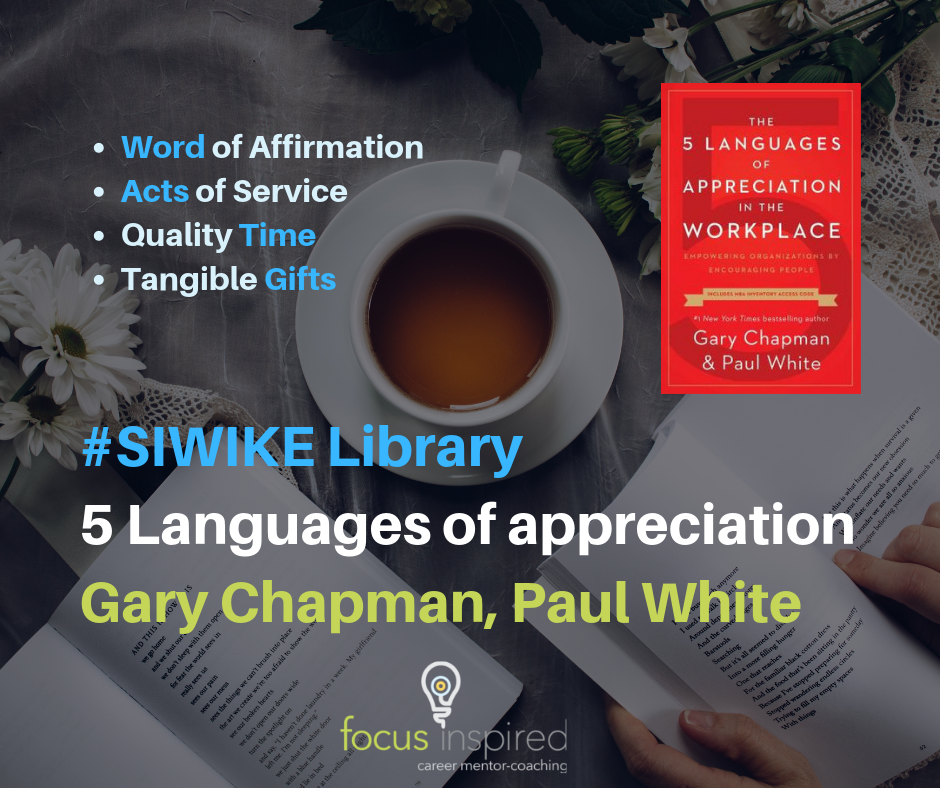 A great resource to help improve employee engagement. Many organizations rely on recognition programs, however, an appreciation program would be more effective. The difference? Recognition – recognizing the behaviour. Appreciation: recognizing a person’s character.
Dr. Gary Chapman and Paul White apply the 5 love languages to the workplace to provide a compelling as well as tactical approaches to increase employee engagement through appreciation.

It’s interesting that Tangible Gifts score lower on many people’s preferences, which is why recognition programs are often not as effective as they can be.
The title is a bit of a misnomer as it is really just 4 languages. Physical touch didn’t score high enough on preferences for it to be considered and included. Though it makes sense why it wasn’t included.

The languages of appreciation can be a short-cut to help with employee engagement, though at the end of the day, it isn’t a substitute for authentically caring about those you work with.

“5 languages of appreciation in the workplace” was read Feb 2019

Why I decided to read it

I read the 5 love languages, which was very eye-opening and when I saw that there was a version that was tailored to the workplace, then I had to move it up on the priority of my “to-read” list.
I’m actually thinking about doing a certification to better understand the tactical applications of all of them.

Who should read it

Definitely for those who manage and have direct reports. Taking the time to pay attention enough to your people to identify their appreciation language can repay itself many times over. You can also get your entire team to take the assessment and share results, though keep in mind that the result is for a point-in-time, so don’t sit take it for granted. People change, and their appreciation language can change. Especially when life changes happen.

Also for anyone in the workplace that has team members. Which is basically everyone. The applications can be for peers and other team members, not just for reports.

Memorable highlights for me

Also that your love language and your appreciation language can be different. Primarily because the context and expectations are different.

When implementing into an organization, it is important to start a cultural shift of caring and an understanding of the need for appreciation. Note that no company can exist without its people. And when you take care of your people, the rest tends to take care of itself.

Get it on Amazon: https://amzn.to/2XpCRtB