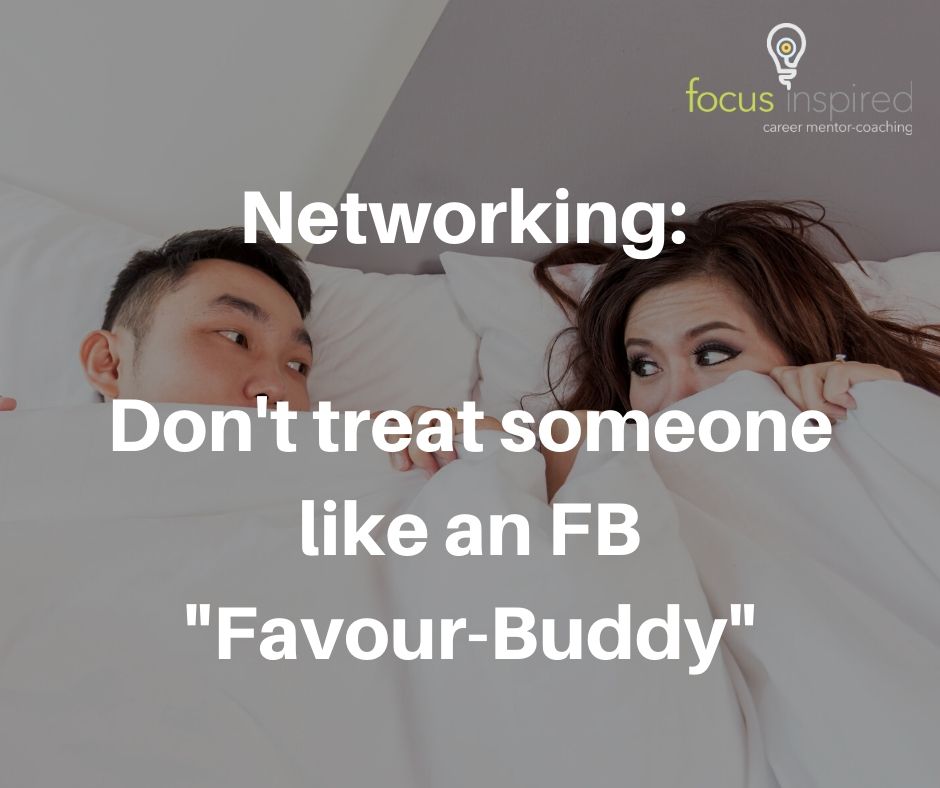 Be aware: Networking – don’t treat someone like an FB

When Networking: don’t treat people like FBs “favour-buddies”. If you’re familiar with the term FB then a totally different context comes to mind (if not, go ask your friends). At the same time, you can probably already start to draw parallels in a professional networking environment.

I was chatting with someone about how attending one of my networking workshops changed their perspective on networking. Instead of their traditional approach to transact, they look to build meaningful connections instead. One of the points that resonated with them was an illustration that if people approached professional networking like they did dating, then people would be (often within a few minutes) asking others to marry them or to “head back to their place”.

In the discussion that followed we talked about the typical approach to networking as someone who asks for “favours”. You meet someone at an event or connect with them online, and they help you with a “transaction”. They refer you. They set you up with an interview. They connect you with someone. They introduce you to a new opportunity. They help you.

Then they become your professional networking “booty-call”. So we thought that an FB was a similar concept.

Now, How do you think that person feels? For many who want to help others, the first “gift” feels great. The second feels OK. The third starts to feel a little bit like they’re taking advantage of you. And for the subsequent favours, they feel like that you don’t even value them or the relationship. Then they get to the point where they dread getting our phone call, seeing your text or message. Before they even speak to you they say “hmph, what do they want now…”

The analogy is not exactly the same, but I think you start to see the point. To have sustainable, long-term and meaningful relationships, don’t treat people like an FB. Build meaningful connections instead. Make sure that on top of being thankful, you look for ways to “pay it back”. Or at the very least to “pay it forward” as karma is a thing. Not necessarily in balance with each individual person but definitely for all of your relationships on the whole.

Take a minute to think about someone who did a favour for you in the past, and reciprocate without any intention of receiving anything back. You can come up with your own dating analogy of what that is…