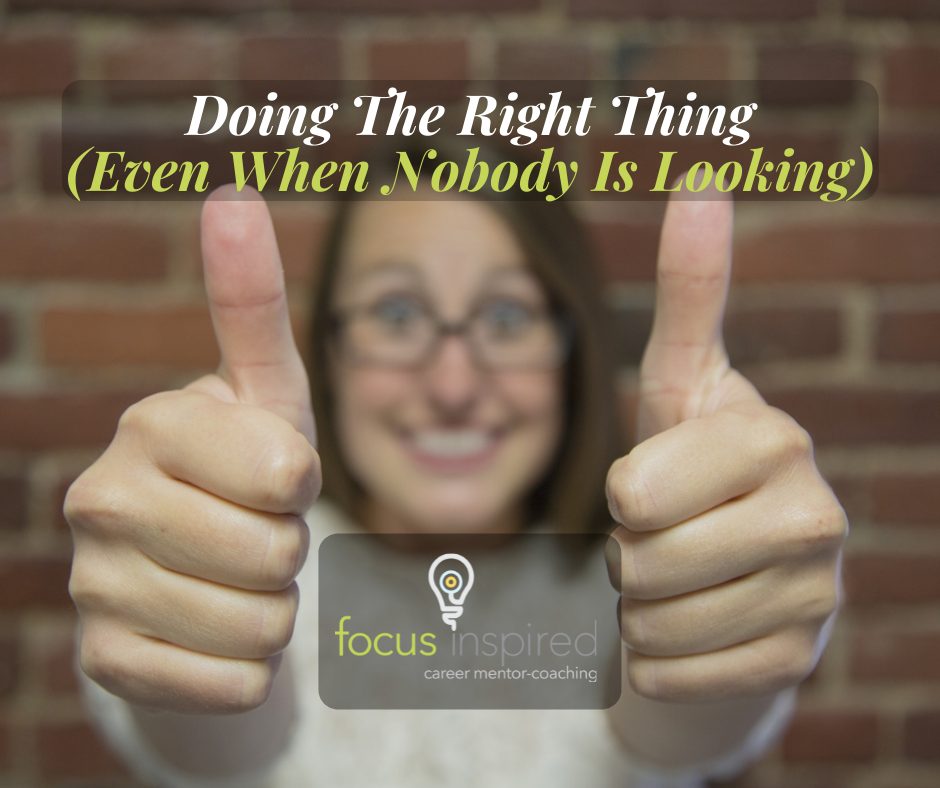 Doing The Right Thing (Even When Nobody Is Looking)

Everyone has had a moment of weakness when they contemplate if they could get away with something when nobody is around. Truthfully, we all have those moments occasionally when it feels like there is very little risk and a large amount of gain. You can probably think back to when you were smaller and that type of moral dilemma would appear more often. Chances are, you likely didn’t take the high road as often back then.

Now to be clear, I’m not going to sit here and pretend like I’m perfect either. Especially as a child, I’ve been in many morally ambiguous to outright knowing the right answer and chose poorly, and I’m sure there are several instances in my adult life where I could improve as well. I’m just here to provide you with a few of my thoughts and musings on this type of topic.

Here are a few reasons why (outside of the obvious ones) you should always try to do the right thing whenever possible.

Let’s take the example of finding a sizable sum of money on the ground. One might say that you should go and report that money to the appropriate authority, and if nobody comes to claim it, only then would it be yours. If you decide instead that you’re not going to do that and just keep the money for yourself, you’re going to remember that the next time you see someone drop a much smaller $10 bill out of their pocket. Is $10 really going to break them? It’s much less than the last time you did it, so it doesn’t hurt, right? The justifications spiral out of control.

Doing good without even knowing it

Let’s suppose now that you’re just in the habit of doing the right thing. You have become so good at it that it has become second nature to you. This may mean that you just automatically do something nice that you’re not even paying attention to, just because, as we just mentioned, it’s your natural inclination.

There are many people who will come to recognize that about you and start to notice, even if you don’t. Just by doing good and what you think is right, other people will take note, and you will find that you are making more friends and have better interactions with people much more naturally. It pays well to be nice, even if there isn’t an immediate and obvious reward for it.

Better sense of self and living

If you take to naturally doing the right thing as often as you can, there will be a much smaller number of times when you feel like you have to do something or you’re feeling guilty about something. The nagging feeling in the back of your mind can be a very powerful one, and it can affect your sleep, your day-to-day efficiency, and keep you from getting other things accomplished. Guilt is a very powerful emotion, and even if you don’t outwardly express it, it can be something that affects you even several years later.

It’s something that I have experienced from time to time, and I’m sure I’m not the only one. There will be an instance when a memory of something that I did incorrectly will just appear suddenly in my head for no reason, and I will think back on that instance and just shake my head as to what I was thinking. I find that the fewer of those I can burden myself with, the fewer times that will occur.

There are many reasons to do the right thing, but these are some of the most impactful that I have come to understand in my day-to-day. Trust me, it’s something that helps you live a much more comfortable life with much fewer stressors weighing you down. You’ll thank yourself later, and be thankful for all the things you have because of it!