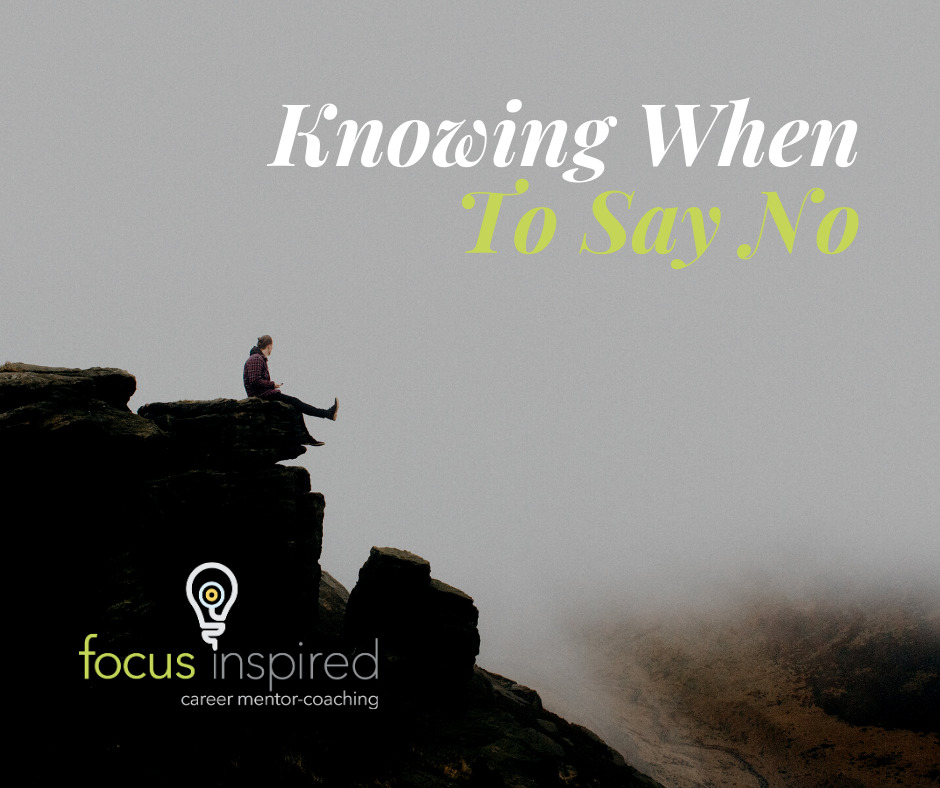 Knowing When To Say No

There is a fairly sizable group of people who usually find it difficult to set boundaries at work. If you are one of those people, you probably run on the mentality you should be doing whatever your boss is telling you to do, regardless of whether or not you feel capable of taking on more work. You might tell yourself that your boss has been doing their job for a much longer time than you have been doing yours, so they probably know exactly what someone in your position would be expected to do, even if they had never been in your position before.

Unfortunately, there are a number of bosses that will continue to give an employee more work to do if they say nothing at all, because it’s an easy way for them to get something off their plate. The employee isn’t giving them any feedback about how their workload is affecting them, so they must be able to take on more. The thought that other employees are able to perform with a similar workload also assumes that other employees will do their due diligence and speak up for themselves, a scenario that seems highly unlikely to be true.

For those who aren’t longer-term readers of the blog, I began work as a Content Writer with my current employer back in August 2020, largely writing blogs and site content for a variety of different companies in a number of different fields. My superiors were always pleased with my work, and even got a special request from one client to be the one assigned all of their content work from that point forward. It was this attention to detail and occasional recommendation for fixing errors on clients’ websites that led my superiors to believe I was better suited in the role of Quality Control Supervisor: a position I still hold today.

This new position started off well. I was learning a lot day by day, and I eased into the workload with smaller amounts of things initially. I would be asked to look over content that had been written for clients or to check websites that were in the final stages of being launched. Over time, this role gradually grew to include checks for other departments, working with clients who were less than pleased with the services they had been provided, and participating in client kickoff meetings to understand their expectations, making my job of checking for quality easier down the road.

Lately however, I had also been tasked with running particular kickoff meetings, particularly for many of the new social media accounts. The idea was to have one person run the meetings rather than all the department heads, saving some time in the long-run for them to allow them to be more productive. The lead for the creative team also had to make a departure for personal reasons, which led my managers to come to the conclusion that I would be best suited for the task, as I would usually have my hands in much of the creative work anyway due to the need to check for quality at every step. It has only been recently that I have started to feel the weight of this amount of work, as I am finding that there is simply too much to get done in a single day by a single person. I understood that when it came to quality, I had proven myself to the point where they wanted to trust me with more of the process, but it had become simply too much for one person to handle.

Ambition is a good thing, and it can certainly prove to be a great thing when you are looking to rise in the ranks and prove your worth, but there is still a great potential that someone will take advantage of that desire to please by giving you far more than you can handle. That is why I recently took the initiative to tell my superiors that I simply could not take on any more work; the task of managing the creative team would have to go to someone else. Do you have a guess as to what they said?

Okay. Thank you for letting us know.

Most bosses actually have very little idea as to how much their employees can handle and will often overload them with things to do as a result. Communication is the key to developing an understanding between both parties, and is the only way that valuable and important feedback gets to the right ears. Yes, sometimes there will be bosses who won’t be as accommodating as mine, but you really don’t know until you ask. Realistically, you don’t have a whole lot to lose and a whole lot to gain from simply being open and honest. Your boss will likely only respect you more for being able to speak frankly and honestly, because it shows that you are a valuable employee with something very valuable to contribute.

Finding a good balance at work is important. Make sure your voice is heard and speak up if your needs aren’t met. Trust me, it will save you a lot of headaches in the long run.