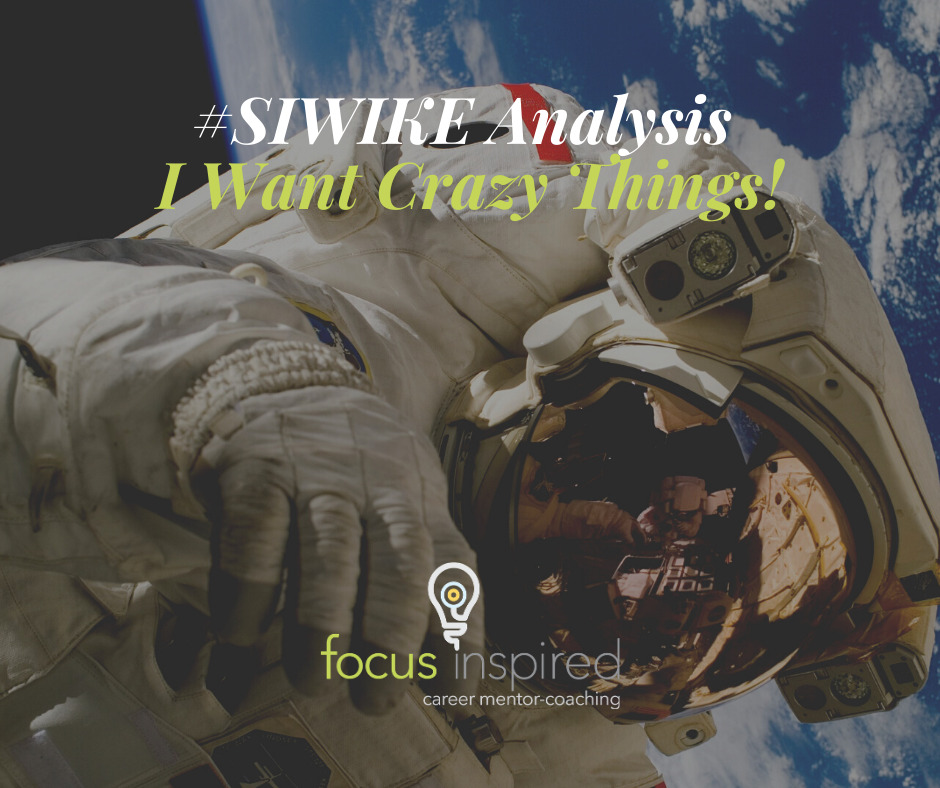 As a follower of FOCUS Inspired, chances are you have heard of the SIWIKE Tools. For the uninitiated, SIWIKE stands for Stuff I Wish I Knew Earlier, and our site is full of these helpful exercises designed for you to make sense of your goals. Perhaps you might also find out a little bit about who you are as a person. In this analysis, we are going to focus on one of these exercises in particular: the “I don’t know what I want” tool, and the potential for this exercise to become what appears to be “out of control”.

Alright, so you’ve completed the first part of the exercise and you have reached deep into your soul to compile a comprehensive list of items that you absolutely want. These wants will have a range of difficulty to accomplish, some more easier than others. They might appear on a time scale like this:

The exercise instructs you not to filter, judge, or rationalize. The idea is to put down whatever comes to your mind regardless of how silly you think the want might be. As a result, you should have a fairly evenly distributed list of items across the various levels of effort above.

You have probably written down a few simple tasks while you were looking for something more in-depth, as a stray thought put an immediate want into your head. As the exercise suggested, you wrote it down because you did not judge it, and continued on your quest for something grander. Believe it or not, level 1 wants are probably your most valuable items on this list! They may point to some basic needs which you aren’t fulfilling right now. Did you want food? Maybe you wanted a nap? Everyone needs the right food and sleep to function, so don’t count them out!

The trick becomes regularly fulfilling these wants. Did you find yourself hungry the next day? Perhaps you are still tired? Start to develop a routine to regularly satisfy these wants so that they don’t appear on your list anymore. You will probably find yourself with some more energy to tackle a bigger want.

These bigger wants might include level 2’s, which could be accomplished in an afternoon. I consider the level 2 wants from the brainstorming part of the exercise to be the little nags in your head that feel like you can get them done in an hour or a day. After you have developed your routine on how to regularly accomplish your level 1 wants, level 2’s can likely be slotted into your schedule. Tackle one or two of them in a day, and suddenly you might find your list of level 2 wants shrinking fairly quickly.

Levels 3 and 4 are largely the same in terms of how to tackle them, one just takes place on a larger timescale than the other. These might initially seem daunting and far off, but ask yourself: what wants do I have that might take less time to get me closer to my objective? For a level 4 want, perhaps that means you have a few level 3 wants to get you there, and maybe each of those can be broken down into level 2’s or even level 1’s if you’re lucky. Check your list. Are there items you already want which can get you closer to your bigger wants by completing them?

Which brings us to the beasts, the level 5 wants. These are the behemoths which often feel completely out of reach, and perhaps in the realm of pure fantasy. Let’s take our example above of becoming a starship captain and break it down.

Let’s assume for a moment that when you made this want, you were referring to becoming a Star Trek style of starship captain with all the trimmings. This would mean that you would have to:

…you get the picture. The likelihood that you would be able to accomplish all of this in your lifetime and have it appear to be even remotely similar to how you imagined it…well, the chances aren’t very high.

At this point you might be saying, “well yeah, that’s why these are level 5 wants. They are so outlandish that they aren’t attainable.” For the most part, you aren’t wrong. However, that doesn’t mean that they can’t be useful or potentially attainable in a different form.

Let’s look at the latter option for a minute. Let’s say “becoming a starship captain” in the world of today means becoming an astronaut. To be the “captain”, you are actually the mission leader of a crew of two to four. Suddenly you have changed the unobtainable to possible, even if the number of people who have ever held that job position is a very small percentage of the population. Still, with enough drive and a little bit of luck, it is possible to achieve. The question you should now be asking, is if this new version of your want is something you wish to keep on your list. If it is, well hey! You have just downgraded your level 5 into a level 4, and you already know what to do with those! If it isn’t, that’s okay, because we can keep breaking it down further. It didn’t appear on your list of wants for no reason.

Ask yourself why you felt compelled to write it down. Perhaps you actually wanted to become an actor in a science fiction film, where you could immortalize yourself as a great fictional character. Maybe you could write a different story with your own captain who has brand new adventures. Or perhaps you think the concept of interstellar travel is so great, that you want to dedicate your life to making that a reality for future generations. All of these are very real potential reasons for why you add it to your list, and it may indicate a hidden drive that you never knew existed until you took the time to draw up an analysis of your fantasies.

Whatever the reasons may be, there are no bad answers. If you haven’t yet attempted this exercise, I highly encourage you to do so, as it can really give you some excellent insights into how you might arrange your future. While you are there, give the retirement memo and eulogy exercises a shot as well. You may find that these two exercises might be easier to write after you have completed the “I want” exercise, so do them in whatever order feels comfortable to you.

Just remember, that to start on your path towards becoming a starship captain, you’re going to have to go make the sandwich you wanted first.