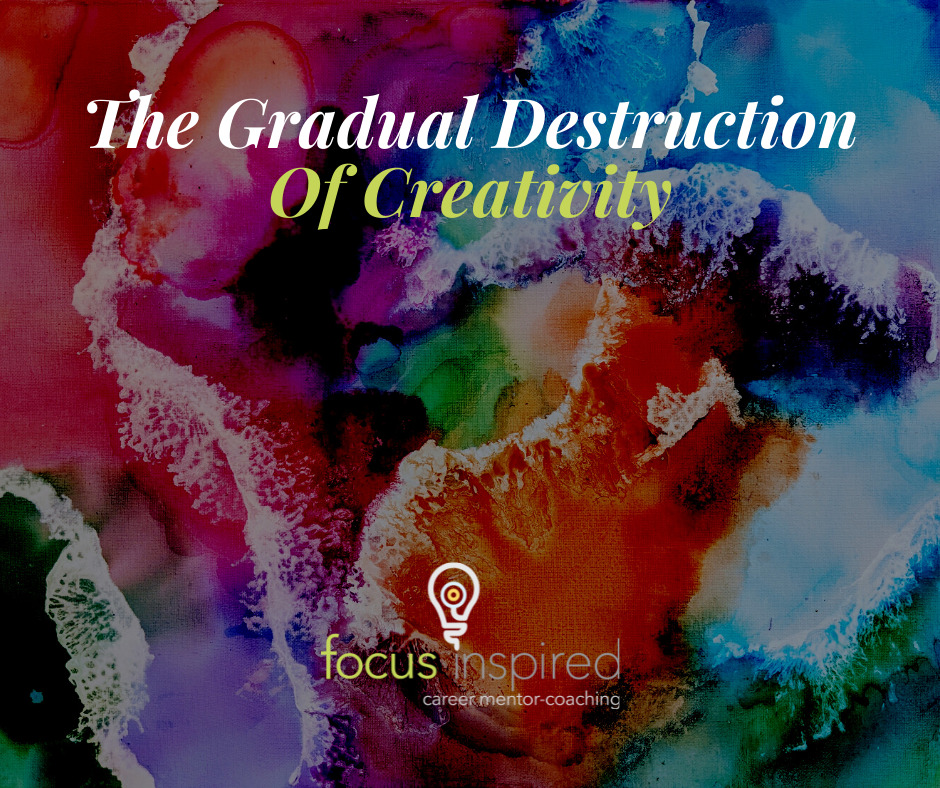 The Gradual Destruction Of Creativity

The creative mind is arguably one of the most undervalued and least appreciated things in education today. Think about it. Did you take woodshop or metalworking classes because you thought they would be fun to take, or did you take them as a career path? English is one of the classes you must pass to reach university, but did you learn creative writing, or was it mostly literary essays and research projects? How about art or music? Did the excitement you got over drawing or singing when you were growing up turn into anything?

The problem is that we all have this preconceived notion that the creative jobs and brains are getting shafted because there’s no money in creativity. The starving artist trope is there for a reason, and if you want to be a writer, musician, or visual artist, good luck finding work, or finding where your talents are useful. The only good paying jobs must be computer programmers, lawyers, doctors, engineers, bankers, stock market analysts…all the jobs which have been historically considered to be the “good” ones that make a lot of money. Sure, for those with an analytical brain, this is great, but there are a huge number of people who simply don’t think this way. They also could potentially think this way if they wanted to, but it simply isn’t as enjoyable to them as being creative.

Yes, artist, musician, and book writer are all viable career paths, and there are some extremely well-paying jobs out there to suit those needs. Yes, it is difficult to get there, but the fact of the matter is that people are currently occupying those jobs and they made it there through hard work and determination just like everyone else. They are success stories who have achieved the creative dream, and the club is not exclusive. If you really want to be those things and have the drive to do it, nobody should stop you. Take on the world and show it why you are the best in your field.

But the next point is probably the most important of them all. THESE ARE NOT THE ONLY JOBS AVAILABLE TO CREATIVE PEOPLE. There is a plethora of work out there with good pay for creative minds. Are you a visual artist? Maybe you would like a job in graphic design, interior decorating, or as an art director working alongside copywriters to build advertisements and marketing campaigns. Speaking of copywriters, this is an excellent job for writers and creative wordsmiths, alongside copy editors, publishers, script writers, technical writers and public relations or communications specialists. Let’s not forget about the trades. Masons, carpenters, architects, electricians, and many more beyond these are all in such high demand due to a lack of interest, and they are all very lucrative careers that offer excellent paths for a wide variety of people.

So if these paths are so open and lucrative, why is nobody taking them? Think back to your freshly graduated high-school self. How much of this knowledge did you have back then as to what the future holds and what your best path might be? Probably not even a fraction of the amount of knowledge you have if you are several years out of high-school, and likely even finished a university degree. In fact, the problem is even deeper than that, because we are psyched into thinking that college level courses are “worse” or “easier” than university level courses in high-school, meaning that if you took them you were resigning yourself to a subpar career path. In reality, some of the most respected degrees and certificates come from colleges, and it simply wouldn’t do to ignore them just because they teach something different.

We as a society have failed the creative minds by making them believe that there are only a select number of ways to succeed that don’t include their unique skillsets when in fact, there is such a large demand for people in creative careers because some people don’t even know they exist or what they’re supposed to do in them. I encourage you to sit down and explore the opportunities available, talk to career counsellors and get some advice on what makes these careers viable and how to get into them.

You never know, you just might land your dream job without even realizing it was in front of you the whole time.