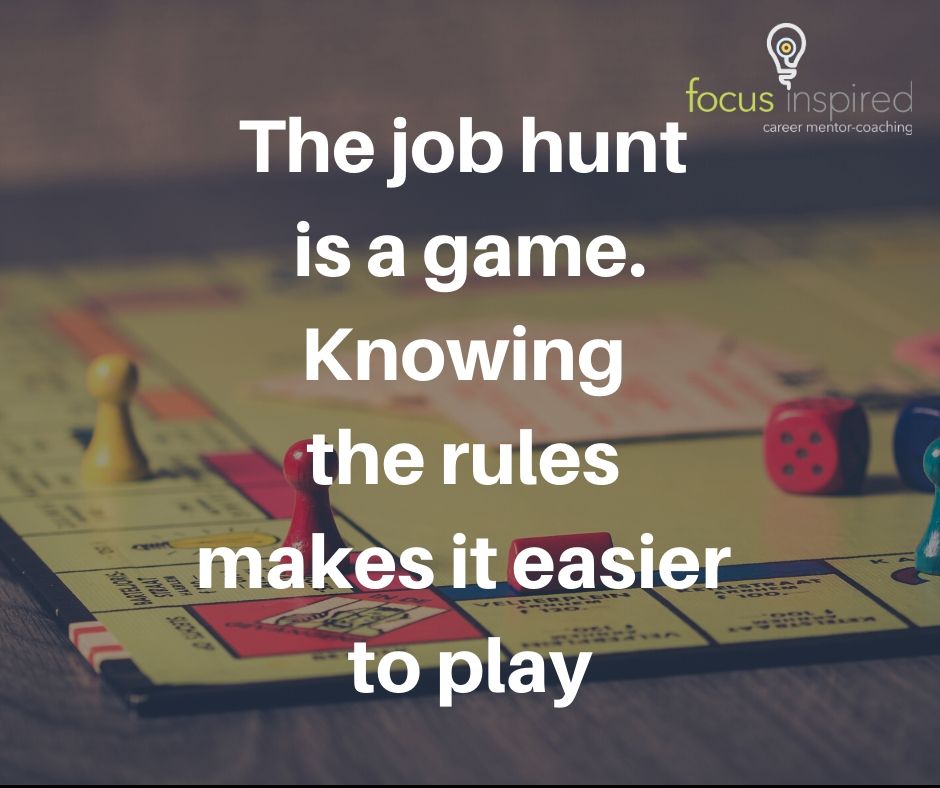 The job hunt is a game. Knowing the rules makes it easier to play

Does someone that goes through the resume, interview process mean that they will be effective in a good fit in the organization? Most recruiters would like to think so. Hiring managers like to believe that they are good judges of character. The reality is that the job hunt is a game. When you’re going through the process, your polishing yourself. You’re basically an actor/actress. A PR’d version of yourself. You’re looking to portray yourself as a perfect candidate going through an imperfect system.

Now I don’t propose to you have a specific and scalable alternative. For me, it would be something along the lines of an apprentice or contract model. Where people can demonstrate their skills so that the employer can test them out. As well as the employee can test the fit of their employment circumstances.

What I do want to highlight is that if the job hunt is a game, then knowing the rules will help you get through it. I start with a resume:

Recruiters have the daunting task of filtering hundreds of resumes into a small handful in order to interview. Not only for one job, sometimes for 20 even 100 roles at a time. You can feel for them. The repetitive drudgery of going through resume after resume. Cover letter after a cover letter. So don’t feel sorry for them. Many recruiters thrive on the hunt. Finding that needle in the haystack. That diamond in the rough.

An experienced recruiter might have a sixth sense or strong intuition for good candidates. Maybe the way something is worded. Maybe the way that it’s grouped with something else. Maybe just some psychic energy and superpowers. Contrast that with a newbie recruiter who only has the job posting to go from. They need to demystify the potentially technical terms and sit through whether or not the bullet points on someone’s experience relate to the requirements of the posting. As they go through more and more of them I get better and better at predicting good interview candidates. Assuming they actually take the time to retroactively reflect on the good candidates coming in versus others.

So the basic rule of getting past the resume process is to make sure that your experience reflects what they are looking for in the job. It could be as simple as reverse-engineering the job posting. Or as complex as knowing what they are actually asking for that is unwritten on the job posting. For an experienced recruiter, they might be able to interpret what you said as a fit for the job. For the less experienced recruiters, they’ll just have to keyword-search-match and find whether they appear on your resume. So it will be a bit of luck for n who ends up screening your resume. And you wonder why the typical approach of creating one resume and sending it on mass to as many job postings as you can find doesn’t work.

Make sure that your resume fits the job as much as possible, then you’re bound to get an interview. Consider the resume screen process like the game of BINGO and you’ll be convinced.

Some people interview well. Others don’t. Unfortunately, there’s no direct correlation of a person’s interview performance with their ability to do the work. The artificial construct of being in a room, and ask questions on the time when you demonstrated leadership skills, to go through a technical scenario, or other questions to assess fit often does not reflect the actual work to be done. Unless of course, they are interviewing for a professional talk show host guest we’re all they do is come up with answers to questions on the spot.

So that often means you need to acquire a new skill, interviewing, in order to get through the job hunt process. You might need to practice the more traditional and conventional questions that are listed on the top 100 interview questions on google. Or you might be lucky enough to have a more conversational style interview or they take you out for a coffee. Or anything in between. At the end of the day, the more that you can practice answering any potential questions, the better you will be perceived to be at your job. Practice makes perfect after all!

Networking is important because, if you think about it, there is no such thing as an organization. It is just a collection of people. At some point, there is going to be a person who is the decision-maker. Even if it’s a computer algorithm or AI that presents a candidate, it will be a person that says I agree with the recommendation of that computer program. There is ultimately a human that is the decision-maker. The more people you connect to and add value to, the more likely that one of those decision-makers might rule in your favour. After all, it’s not about what you know, it’s who you know. And it’s really not about who you know, it’s about who knows you.

What unwritten rules have you experienced to be true?