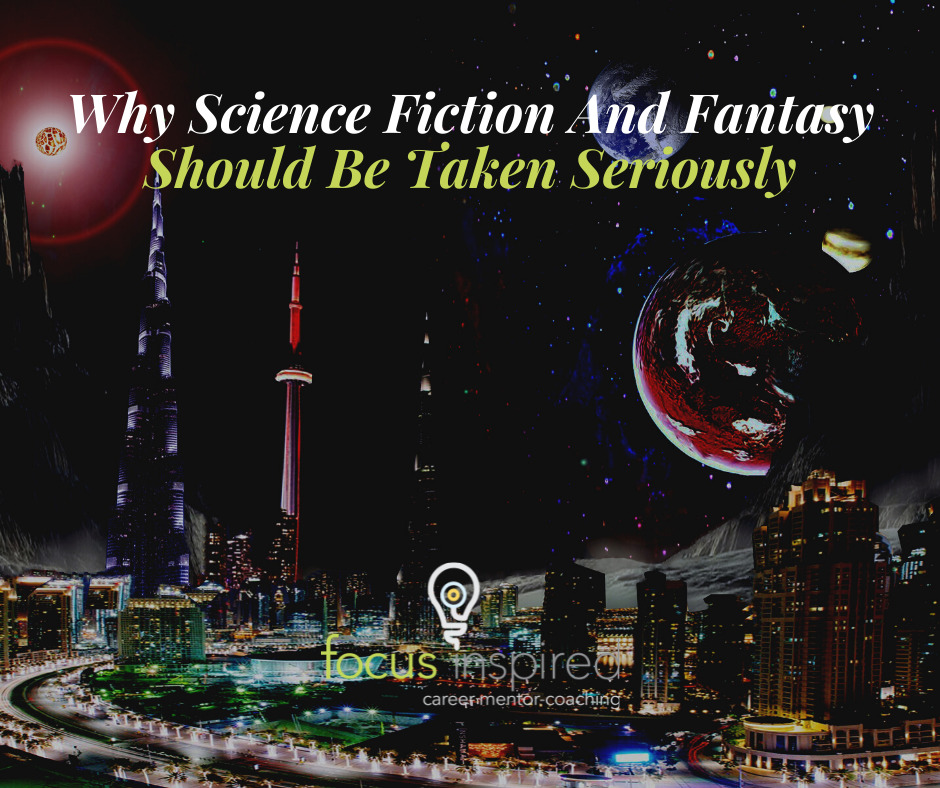 Why Science Fiction And Fantasy Should Be Taken Seriously

As someone who tends to enjoy wordplay and writing blogs in their spare time, it will probably come as no surprise to you that I also enjoy reading books. There’s nothing quite like a good story to capture your imagination and draw you into a new world. I do say new world, because that is typically the type of stories that I like to read. The occasional non-fiction or story set in a recognizable place on Earth is nice from time to time, but the ones that really get me engaged are the ones that explode beyond the boundaries of our planet and take on a whole new frontier of discovery and wonder.

Unfortunately, it seems that to generally get noticed in the Science Fiction and Fantasy fields, you have to do something truly extraordinary that breaks the mold and goes where no man or woman has gone before. JRR Tolkien had to not only create a world, but also several languages, races, societies, and essentially multiple civilizations for the Lord of the Rings Fantasy series. While Star Trek does feature Earth, it was so futuristic for the time that it barely seemed recognizable, not to mention the fact that Earth was hardly the main focus of the series. Harry Potter is also featured on Earth, but the normal world is once again pushed off to the side. Let’s not also forget that each of these franchises managed to get popular enough to be made into several successful TV series and/or movies, which are much easier to digest and a more accessible entry point for people in Science Fiction and Fantasy, which contributes to their recognition as an overall success.

To see why movies are often considered so important to a series’ success can be seen through an example of one of my favourite novels / series of all time. The Inheritance trilogy-turned-tetralogy, or the Eragon series by Christopher Paolini, did in fact get turned into a movie, but it did not perform well and somewhat tarnished the reputation of the books. Most people will brush off the series as an inconsequential fad that was only popular for a few years before becoming just a fond memory in the minds of most. It is brushed off as a series for teens that has since faded into the background, ignoring the fact that although it is arguably not reaching the same level of detail that JRR Tolkien poured into his stories, it is still a full and complete world that came with its own map, fragments of multiple languages, a whole school of magic, and several races with their own intricacies and cultures. Countless hours and years of time and effort have gone into creating an incredible world, only for it to be brushed off as inconsequential. What happened?

Shifting from Fantasy to Science Fiction, another series I devoured from beginning to end was the Lost Fleet saga by Jack Campbell. This is another space-faring adventure that builds fairly three-dimensional characters and interesting technologies to tell the story of a fleet of warships fighting their way through enemy territory to get home with critical information to stop a war. This series has featured some of the best descriptions of space-based combat I have ever read and kept me gripped all the way through the series right to the very end. It’s very true that not everything can become popular and for good reason, but it still saddens me to think about quality stories just itching to be read by the eager reader looking for their next fix.

The reason that most people who consider Science Fiction and Fantasy to be a “waste of time” or “lower-class writing” is because it isn’t grounded by anything in the world they are familiar with. There’s no apparent correlation between the story and their current lives, so it must not give them anything worth reading. It requires a deeper sense of imagination than the typical story to craft, build and read: a trait that is often associated with the “child-like” behaviour of exploring and learning the world around them. Naturally, as soon as it’s labelled “child-like”, you are going to have a lot of people who instantly dismiss it as irrelevant.

This ideation is interesting, because many of these same people will try to reconnect with their childhood later in life, so much so that it has been given a name: a mid-life crisis. The sudden realization that you are not going to be getting any younger and want to feel like you are young again for the simple reason that you don’t want to allow yourself to feel like you have lost your youth. It has been shown that people who embrace their imaginations and inner youth will often keep that sense of imagination and will be less likely to have a mid-life crisis later. And yet, people still seem to scoff at the idea.

What boggles my mind the most is that people will accept Science Fiction classics like War of the Worlds or the Time Machine, or Fantasy classics like Alice in Wonderland or Gulliver’s Travels as masterpieces, simply because they have been accepted into the literary canon and people have written countless articles and books analyzing and studying them for their literary prowess. It is this same force that one might accept the Lord of the Rings into this category, because enough people say it is good to make it so. But why must the entirety of these categories be limited to what people say is good, rather than by what you believe is good by making your own opinion?

It is for this reason that I champion the Science Fiction and Fantasy genres, because they reach levels of creation and imagination that is frequently unsurpassed in the literary world. I will often be lost in one of these books for weeks on end because I become heavily immersed in the world the author has beautifully and lovingly crafted for their readers. It is as much a work of art as any painting or sculpture, with the author using the medium of words to paint their landscapes.

You may not enjoy the genres because you tried them once and they didn’t mesh with your tastes, and that is okay! You made your own judgement, and I am not here to deny you of that. If there is one thing you can take away from this topic, it is this: do not let anyone tell you what is and what isn’t an acceptable medium for you to enjoy. Make your own decisions and embrace them wholeheartedly based on the research and opinions you form, and you will likely enjoy your life much more thoroughly…and probably pick up a few more books you didn’t know you’d enjoy along the way!