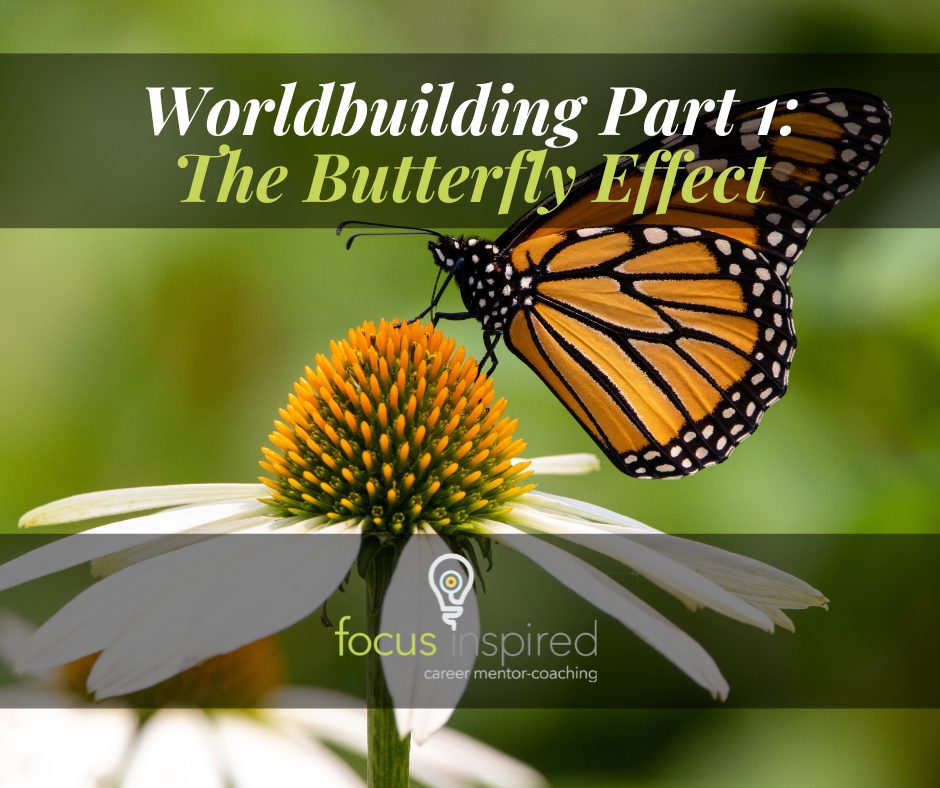 Today, we are getting a start on a subject that is personally one of my all-time favourites when it comes to writing: worldbuilding. To me, this is one of the coolest parts of being an story crafter, for people who write both for fun and professionally. In this creative outlet, the only limits are your imagination and how far you are willing to push the boundaries. If you want to write a story about a world you live in with a few creative licenses, you can! If you want to write a story in the vacuum of space, you may do that as well!

There are no limits. Just possibilities.

This will be the first of a few blogs you will eventually see on worldbuilding, because the topic is so vast, it’s impossible to capture in just one blog post. Today, I wish to talk to you about a technique of worldbuilding I like to call “The Butterfly Effect” method.

What is the Butterfly Effect?

Many of you will likely have heard of this philosophy before, as it has gained traction in many different circles, but especially in the writer’s world. The school of thought dedicated to the butterfly effect believes that if a butterfly flaps its wings in one part of the world, it will set in motion a chain reaction of events, initially small, that eventually results in the creation of a much larger event somewhere else in the world. For example, the butterfly flaps its wings, causing the air around them to stir, influencing the air currents in such a way that the wind eventually changes course ever so slightly enough to blow the rake over left out in a yard in Tennessee, scratching a car and causing a fight between a couple for leaving a rake loose in a windstorm that otherwise wouldn’t have happened.

Of course, it doesn’t have to be a rake in a windstorm, the idea is that even the smallest event could have huge repercussions later, through a usually untracked chain reaction that is completely background to our everyday lives. Many movies and video games have been created around this idea, even choose-your-own-adventure plots follow this model, giving branching options, storylines, and endings for each choice you make.

Several years ago, I was among the many who used to enjoy simple, click-based games on Facebook that gathered large communities as a result. Forums for each game’s community were used as hubs for the players to brag, ask questions, hang out, and generally be a part of something social. The community I joined also had a section on the forums for writing in general, and it was here that I started writing choose-your-own-adventure plots, where forum users would have to choose an option for how the story should progress, and the most popular choice would move forward. It was here that I really started to understand the concept of the butterfly effect, and what it would mean for a story.

How does this relate to worldbuilding?

Much like how I’ve described writing a story like the one above, one could also develop worlds using the butterfly effect model and achieve some pretty fascinating results. All one has to do is choose a base world upon which you can build, make one change to it, and ask yourself how that change affects the rest of the world.

Let’s suppose we start with the world we live in today as a base for simplicity. Let’s also suppose we make a change to our world, something that initially seems silly or inconsequential, like saying that instead of the sky being blue, the sky is instead red. How does this seemingly harmless change affect how our world operates?

As a start, if the sky is red, then the oceans too would appear to be a red colour, for they only appear blue because they reflect the colour of the sky. This now means that coastal cities have a completely different vista when looking out upon the sea. Coastal arts might be very different now, for the deep blue that inspired so many sea shanties, love songs and poems may now take a much darker turn towards the seas of blood and despair.

Any lifetime sailor will tell you that the ocean is a dangerous place, and a change like this may make that opinion much more commonplace. What if this shift in perspective caused fewer people to sign up for the navy, and fewer explorers were willing to risk themselves on the high seas? Does this mean that the exploration of the new world happens later? If so, what does that mean for Canada and the United States, even Mexico? World events as we know them today only occurred because things happened at exactly the time that they did, and this shift in attitude means entirely different people making entirely different decisions are bound to colonize the new world. If it even happens at all!

What happens if the red sky made explorers so averse to traversing the Atlantic that it was in fact the native population of the Americas that makes first contact with Europe instead on their boats? These strange people from other lands, conquerors of the seas, are revered for their bravery and advancement. Suddenly, by making one small change, we have settled on a potential fiction story of a Native American main character who becomes part of the first crew to make the voyage across the great red ocean in search of new lands, only to come across a strange new civilization that reveres them for conquering the vast torrents of blood, once considered too treacherous and dangerous to traverse.

All because we just decided to turn the sky red.

Of course, there are many different ways that one could generate worlds and stories from a change like this, this just happens to be one of those infinite possibilities. You could have a world of your own that you’ve already started to build, and one small change to that world upsets its whole balance of power. It can be an extremely fun and rewarding exercise!

In the next blog on worldbuilding, we are going to have a look at characters and character development, so be sure to stay tuned for that! As always, I really enjoy being able to showcase my thoughts and opinions on writing in hopes that some of you might be able to show off a landslide hit of your own. Or, you could have a pastime that you simply enjoy escaping to every now and then.

In the end, the choice is yours.