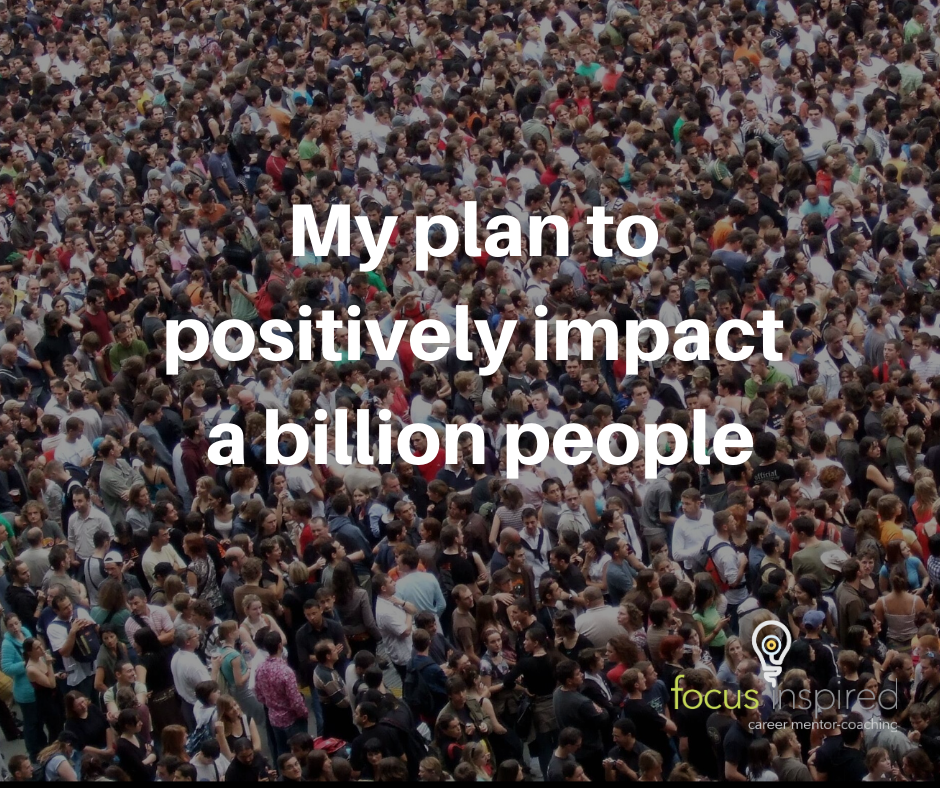 My plan to positively impact a billion people

My BHAG “Big Hairy Audacious Goal”. The quote “ shoot for the stars and you might hit the moon“ comes to mind. I’m not sure if I’ll truly hit a billion (I calculated and if I spent 1-second with each of the billion people, it would take me 32-years!), and if I get to 100 million, 10 million, 1 million, hundred thousand or even less that at least I’m making an impact for those people.

So let’s define what I mean by positively impact. For me positively impact means that the individual person acknowledges that something I said, did cause them to go in the direction of their life where they now are happier or have found more purpose in what they do. I am figuring out how to potentially measure that. I was looking to build a website where someone could actually register and say whether or not I have impacted their lives. I would probably allow influencers and celebrities to create accounts and see how much of an impact that they have had. That could be a nice way for people in the local community to nominate local heroes to show them exactly how much impact they are having. How that would technically work I had some ideas and how to do that but that’s for another post. Even if I do figure out a way to measure that positive impact, at some point I’d have to start counting down towards 1 billion.

A billion is quite a large number. I calculated that if I spent one second with each person then it would take me 32 years. Which would mean that positive impact could not be one-on-one. I started by doing one on one coaching. So I have only really taken on maybe 10 or 15 clients a year. If I had 10 new coaching clients yearly for 20 years that’s only 20 people. So you can see how long that could take if I only went down that route

I run workshops of which I’ve received many compliments and which I count as demonstrating positive impact. Those workshops are 20 maybe 40 maybe 100 people at a time. I would need a huge number of those workshops to potentially meet that billion. If I ran a 20-person workshop every day for 20 years that would only be 7300 people. Moving up the orders of magnitude but still a small amount.

I wrote a book which will help me to possibly get to that Mark. So it is not on any bestsellers list yet so there or at most a few hundred people that have been impacted by that. The plan is to write a few more books. Maybe 3 to 7. If I could have lifetime sales for each book to be on some sort of best sellers list (5,000 books sold/read times 7 books) then that might get 35,000).

I created some online courses which again have received positive impact. And again only counting towards a few hundred. Here is where I think I can achieve most of the skill. The goal is to provide them to schools. Some campuses have tens of thousands of students joining the ranks every year which would allow a much bigger dent to be made in that billion people. So if I were able to get a large university onboard with like 10,000 students annually, then over 20 years that gets us in the 200,000 mark.

Once I get there, then I can work to train-the-trainers so that I can more accurately gauge that impact. Then work individually with as many people as I can so I know for sure I can make that impact.

Do you want to be part of the movement to make that kind of impact? Let’s talk!