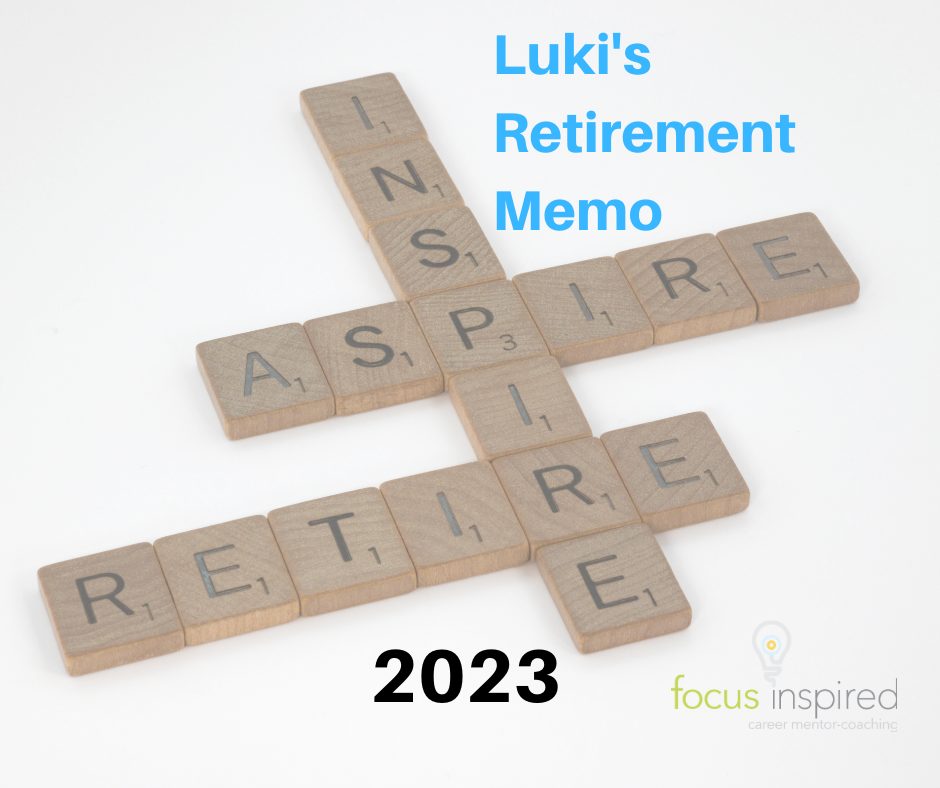 One of the exercises that I encourage those looking to answer the question of “what do you want” is to write your retirement memo. Take a look here for details. The gist of it is to imagine that you are retiring and a memo needs to be sent out to the company/association that you’re working for: what would you want that and I want to say?

The last one I wrote was in Sep 2020 in the midst of the pandemic. You can read it here

I thought it needed an update and here’s the version for Jan 2023.

Luki Danukarjanto is most know for having made Toronto the Mentorship Capital of the World and for Elevating Education.

He retired from the help of FOCUS inspired, the educational community that he founded in 2015 which has grown from a solopreneur operation to a multi-trillion dollar organization with offices in over 100 countries around the world. He has transformed society with his visionary views on education and mentorship, and more importantly making them a reality.

Luki has brought the education of what was once called “soft-skills” to main stream. What was once considered “soft” and difficult to assess let-alone teach, has become the foundation of most school curriculums and learning academies around the world. He was able to bring multiple concepts from the Theory of Multiple Intelligences (Howard Garner) to Rapid Skill Acquisition (Josh Kaufman) to Growth Mindset (Carol Dweck) plus his own observations on mindset and motivation, first to make learning a meta-skill (a skill to help acquire skills) along with various mind-management skills. Then to break down almost any any skill imaginable (soft or hard) into its most efficient and effective learning components.

What used to take universities and colleges 4-years to train someone, now takes a fraction of the time, with integrated working experience in an apprentice/mentorship model. Plus, the reduced learning time, allows youth to explore their areas of interest with the growth of the gig-economy and fractional-employment. Through the process, young professionals are able to find more fulfilling careers and unlock their career potential (one of Luki’s long-time goals). While the re-imagined education process hasn’t reached full coverage of the entire system (such as with the professional designations of medicine, law and accounting), many have plans to convert to get younger talent into the industry with additional desire and engagement.

The process was started with humble beginnings with the job search of all places. The job search is often seen as a strenuous and frustrating exercise, and through the educational process, Luki, with the help of the FOCUS inspired team and collaborators, was able to make the job search process as painless as possible. FOCUS inspired moved to other learning areas, and as they say, the rest is history.

The process has been made widely available to anyone worldwide that would uphold the values of its use. The reach allowed Luki to reach his reported goal to become what he called one of the “new billionaires” which was to have “positively impacted a billion” people. He often ended with the joke of “and ask each one for a dollar afterwards”, which has served him and FOCUS inspired well to provide its value in education at scale.

Toronto – The Mentorship Capital of the World

Along with the educational culture shift to adopt a more integrated apprenticeship/mentorship model of learning, Luki also advanced the concept of Dan Sullivan’s “Who not How”. The concept was introduced to Luki by Dr. Benjamin Hardy after reading Benjamin’s co-authored book with Dan Sullivan, “10x is easier than 2x”. The mentorship phenomena gathered steam and momentum starting in Toronto. The understanding became that the large majority of high-performing people, celebrities, athletes, etc. have coaches and mentors, so shouldn’t everyone have one to lead their best possible life? At its announcement, nearly every resident of the city of Toronto and the surrounding GTA (Greater Toronto Area) was reported to have a mentor from the variety of public and privately available mentoring programs and services.  The world took notice and other cities boast larger numbers, largely due to larger absolute numbers (i.e. the entire population of the country of Canada where Toronto is part of, is not much bigger than some cities). Though many still regard Toronto as the birthplace of Mentorship as a global cultural phenomenon, and Toronto will always be the Mentorship Capital of the world to many. Mentorship is now well regarded as being woven into the fabric of society.

Luki was born in Indonesia and moved to Toronto, Canada when he was young. He grew up in the city and graduated from UT Scarborough with a degree in Computer Science. He worked for Deloitte as a supply chain technology consultant where he had great experiences that ultimately lead him to start FOCUS inspired in 2015. Luki’s continual emphasis on building meaningful connects and relationships allowed him to foster many collaborations with various educational institutes. His MO (modus operandi – way of working) would be to find passionate individuals and enable them to be the best version of themselves in their own area of passion (so if you’re passionate about an area and just need an opportunity to show it, then reach out to Luki http://linkedin.com/in/lukdanu). He started with a collaboration in tech, as well as in event management and marketing. Then of course in education and many different areas. FOCUS inspired has become the launching pad of many of the worlds most successful companies and organizations with many founders and leaders starting at FOCUS inspired (or perhaps more accurately with FOCUS inspired as client #1 or an early client).

Luki resides with his wife and two children in Markham, just north of Toronto. They are often travelling to support other collaborators with their mentorship and education endeavours. He continues to write books (more accurately enable others to write books with him) on various topics typically related to jobs, careers and life. He works with a lot of content creators to share his thoughts, experience and SIWIKE: Stuff I Wish I Knew Earlier – an ever growing repository of human knowledge, experience and lessons.

Although he is retiring from FOCUS inspired, you’ll surely see him out and about and looks forward to spending more time with his kids and grandkids. While at the same time continuing to mentor as much of the world as he can!